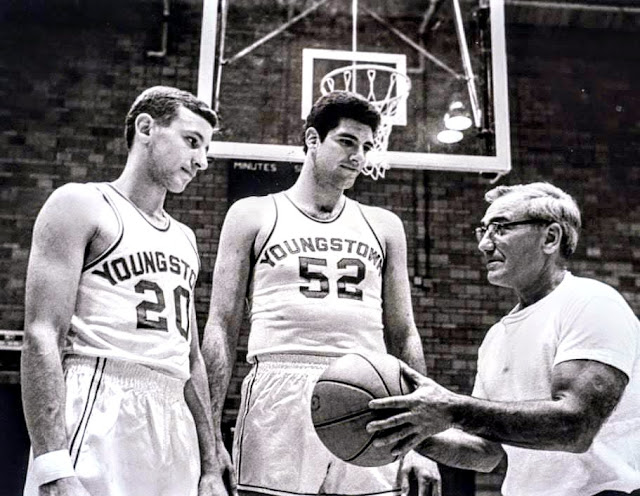 When I was 11 years old, I went to college basketball’s Final Four with my grandfather. As we descended the stairs one morning into the hotel restaurant, I saw Tom Izzo, the head coach at Michigan State. Izzo is the real deal. By then, he’d already won a national championship and been named national coach of the year three different times. He’s since been inducted into the Hall of Fame. He’s been so successful in the NCAA Tournament, they call him “Mr. March.” When I saw him, my 11-year-old eyes got really big.

The strange thing, though, was that when Izzo saw us, his eyes got really big. He stood up and rushed over to my grandpa: “Dom? Dom Rosselli?” They exchanged pleasantries as I looked on, dumbfounded. Eventually, grandpa introduced me. I don’t remember much of what Izzo said. But I do remember he finished with something like, “You know... Your grandpa? He’s the real deal.”

I actually did know. In his time, my grandfather, Dom Rosselli, was a college basketball coach himself. He was more than that. He was a legend. In fact, the very day I trembled in the presence of Tom Izzo, my own grandpa had won 357 more college basketball games than him. 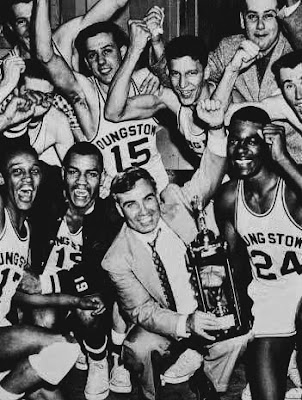 Dom Rosselli coached basketball for 38 seasons at Youngstown State University in Ohio. He collected 589 wins. He’s one of the winningest coaches in the history of the game. Several different organizations named him “Coach of the Year” throughout the 50s and 60s. He was even named, hilariously, “Italian Coach of the Year” in 1958. Not too long after his retirement, Youngstown State painted “Rosselli Court” on the floor of their arena and, several years later, erected an enormous statue of him outside its door. When he died, it was on ESPN. Flags in the city of Youngstown were flown at half mast. Tom Izzo was right. Dom Rosselli was the real deal.

Growing up, both sets of grandparents were just a short drive away. After the Final Four, we visited with my other grandparents. They wanted to know about the trip. My Grandpa Johnny did not move in the same circles as Dom Rosselli. While Dom was becoming a legend for the city of Youngstown, John Slovasky was making it smoke. For 35 years he worked in one of its famous steel mills. As a kid, I was just told that Johnny had “worked at the mill,” and so I pictured him as a man of the blast furnace and of molten iron, a hardened laborer. It turns out he did bookkeeping in one of the offices. But when the Youngstown steel industry was decimated in the late 70s, Johnny was one of the now unremembered 40,000 who lost their jobs. For years afterward, he wallpapered homes to make a living. 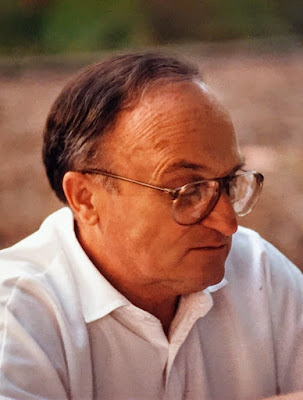 I knew my Grandpa Johnny as an older man and, as I knew him, there wasn’t much to him. He was a quiet man, a calm man. He was a Buick man. He liked to talk about routes and avenues, about “the construction over on Tibbetts Wick.” He could always remember a good restaurant about halfway to someplace, but he could never remember its name. He hated the New York Yankees, but let his wife do the yelling at the TV. He had one of those senses of humor where you really wanted to be certain your girlfriend liked you before you let her meet him. He liked John Wayne. He fixed things with duct tape. When he died this week, it was not on ESPN.

Neither of my grandfathers were the sit-you-down-and-teach-you-a-lesson type. They weren’t going to leave you a book of aphorisms. The lesson was in the very doing of their lives. Simply moving among my grandfathers ― passing one the chocolate, losing to the other in chess ― was the lesson. It was on you to observe it.

A few years before his death, Youngstown State made bobblehead dolls of Dom Rosselli. They were pretty hilarious. When I opened up the box, I noticed that Grandpa had actually written on the back. It was autographed. “Coach Dom Rosselli.” I was surprised by it. I’d never seen him autograph something. But it made sense. Dom Rosselli was, after all, a sportsman. Grandpa’s living room had more cups and plaques than did my small college’s trophy room. But even after spending hundreds of hours with the man ― after playing countless games of chess with him in that very living room ― I’d never heard him tell a single story about even one of those trophies. Not one story. That’s why, when I met Tom Izzo, I couldn’t attend to the fact that my own grandpa had, at that point, outgunned him by several hundred wins. In my mind, that’s just not who the man was. He wasn’t “Coach Dom Rosselli.” He wasn’t a legend. He was just “Grandpa,” who never held it against me for not improving at chess.

John Slovasky never autographed anything. He didn't even sign his checks correctly. His real name wasn’t Slovasky, after all. In the 50s, just after getting married, John decided that his original family name was a bit of a mouthful. He should just be Slovasky. But instead of legally changing his name, he just began to fill out paperwork with Slovasky. Who’s going to know? This isn’t significant, right? Eventually his identity was fudged over and he just sort of became John Slovasky.

There is something very Johnny about that. There is something very Johnny about the simple shrug he would surely have offered if told he would need to legally change his name. This swings several ways. When Johnny was in the war, he was ordered to swim to retrieve nurses into a lifeboat in the Azores Islands. He didn’t know how to swim. “I was told to do it,” he shrugged just the same, 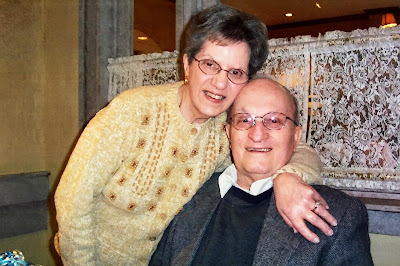 looking around for more chocolates. Johnny’s life was not very complicated. His business was that which was right in front of him. Johnny was sheer straightforwardness. He just, as the Buddhists like to say, “chopped wood and carried water.”

In reflections like these — recalling fathers and grandfathers — there’s a temptation to reflect on the way they embodied some bygone sense of toughness, how they taught you the meaning of strength. Oddly enough, my grandfathers taught me far more about weakness and about losing than they did about strength. Grandpa Rosselli had not a word to say to me about his 589 victories. To me, at least, when he talked about basketball he talked about losing at it. There were a few seasons when Dom Rosselli could have won a national championship. Across a few different divisions, he 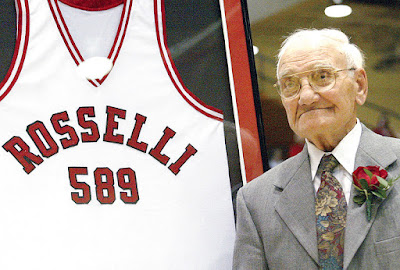 coached in 13 postseasons. The year they were the tournament’s overall #2 seed, they were upset in the Elite Eight. There were seven times he coached in what is now the equivalent of the Sweet Sixteen. But a national championship never came. “Grandpa, how many games did you win in total?” I once asked him. He never gave me the answer. “I lost several hundred.” 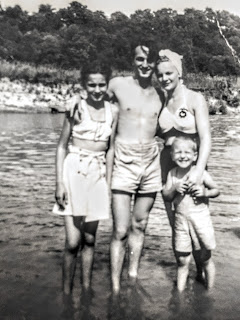 When he was drafted, Johnny told the sergeant at the draft board that he had no interest in combat. His older brother had been killed in the Army while in France. When the letter came, he had to read it to his mother, who didn’t know English. He had no reverence for war. War was not a moment of strength, but of fear and of trembling. War killed his brother and broke his mother. He never told stories of the war. My aunt had to press the story about the nurses in the Azores out of him some 65 years later. [1]

One of the unspoken lessons of my grandfathers, as I gather it, is that strength is far less meaningful or important than we often think — that the real contours of who we are are formed, not in our strength, but in our failure, our fear, and in our trembling.

At heart, I am an academic. And as an academic, one of the last things I would ever give up is my narcissism. I’m certain of my call to do extraordinary things with my life, convinced of the exceptional urgency of my projects. But this puts me at odds with everything my grandfathers taught me. Dom Rosselli was one of the best coaches in the history of college basketball. “They wanted to fire me,” he once remembered in an interview, thinking of a bad stretch. “Eh. I could find another job... maybe make more money. Maybe they would’ve been doing me a favor.” As an academic, I’m desperate for everything I do to be taken seriously. Johnny didn’t want to be taken seriously. He wanted to be at home near his wife. He wanted to read the newspaper. He wanted Derek Jeter to strike out.

We live in a meritocracy, a society that insists we must hustle to do singular and exceptional things. A central dogma of modern life is that we have to be strong and independent. Johnny’s later life, on the contrary, was one of physical weakness and radical dependence upon his wife. His world was one where even just sitting and standing were extraordinarily difficult. The insistence that we “not mention those kinds of things” is precisely the lie of the meritocracy, the false dogma that the only beautiful part of life is the part that’s lived in strength and health. On the contrary, Johnny’s weakness was precisely the space in which it became all too clear how much he was loved. In the last months of his life, as my Bubba would help him get situated around the house, she’d sometimes stop for a hug. “Why do you want to hug me?” he’d ask. Screaming, because he could hardly hear: “because I love you!”

[1] Maribeth Slovasky, Of Lessons Learned: An Interview with My Father
Posted by Anthony J. Rosselli at 10:27 PM